The Pacific Northwest is well known for many things, one of those is various wild mushrooms. If you know an experienced mushroom picker, you can join along one of their foraging expeditions and learn a bit about some of the choice edible mushrooms that grow here on the island! If you take a walk on any of our many trails here on Vancouver Island, you are likely to find a seemingly infinite number of colourful mushrooms sprouting from the earth, downed logs, rotting trees, and cracks and crevices in the forest. 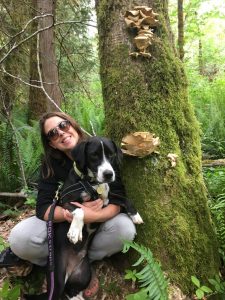 Below is a list of our top five favourite edible mushrooms that you can find right here in Nanaimo, B.C. If it is your first time foraging you should be sure to go out with somebody experienced in mycology, as there are many toxic and poisonous mushrooms!

This beautifully coloured mushroom can be found growing from the ground in the autumn months. Many people will use this mushroom in lieu of meat in dishes such as soups and pastas, but they can also be cooked in white wine and garlic and enjoyed a la carte! These local favourites can be found popping up all over the ground here, but their identifying feature is not their pale yellow or orange colour. Rather, Chanterelles are funnel shaped fruiting bodies that have ridges rather than gills (compared to false Chanterelles) that run part way down the stalk. 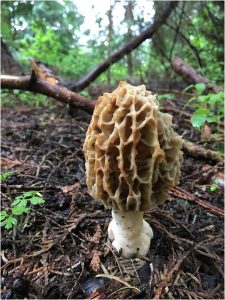 These mushrooms are aptly named, as the fruiting bodies often look like their oceanic namesakes. Oysters tend to pop up in early spring, when the air begins to get a bit warm but is still quite moist. Last year my daughter was able to harvest Oysters for several weeks, where this year her window was shortened to about two weeks due to quick temperature changes. What we call “Oysters” here may actually be a variety of pleurotus lineages, but they are virtually identical and both edible. These mushrooms can vary in size, from loonie-sized to massive head-sized fans. They are often found growing on decaying conifers or hardwoods, where the mushrooms grow like little shelves along the trunk of the tree. These yummy mushrooms taste fantastic in stir-fries, pastas, or soups, where their delicate flavor can subtly add to the dish rather than overpower it.

There are several species of Morels that grow here on the island. You can find these mushrooms in the early spring, right when the temperature starts to rise (this happened in mid-April this year). You can often find these brainy looking mushrooms sprouting from the forest floor, along the base of apple trees in old orchards, or in slashes that were burnt the previous year. Don’t be fooled by their strange appearance, when fried up with some garlic and white wine, Morels are one of the tastiest fungi around! 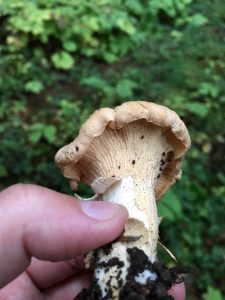 These mushrooms are very obviously ‘Kings’ of the forest; sometimes getting as big as 6.5 lbs! What makes these mushrooms stand out is their porous underside. Where many other mushrooms usually have gills, Boletes actually have many tiny pore tubes from which they release their spores. The stipes are usually quite large, and can get up to 10” tall and 4” thick at maturity. These mushrooms are good for putting in soups, pastas, and especially tasty in risotto. If you are lucky enough to find many of these, you can dehydrate them or freeze them for later use, as they hold their flavor quite well.

This ‘mushroom’ is not actually a fungi! Rather, is is a parasitic fungus that grows on certain mushrooms, turning them lobster red. For example, milk-caps and Russula are often parasitized to create these lobster mushrooms. They are appropriately named not only for their colour, but also for their seafood-like flavor. These firm and delectable mushrooms are a perfect addition to a seafood fettucine! 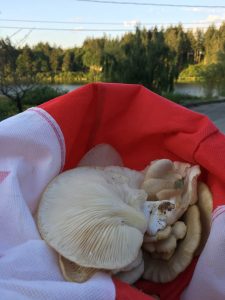